Delightful, sugar free and filled with cinnamon on both sides. It sounds like everyone favorites bread for a hot drink on a rainy day.

As I currently have a little time, I had been searching on the web last week. On the lookout for new, challenging ideas, inspirational dishes that I have never tried before, to surprise my loved ones with. Looking for a while yet could not discover any interesting stuff. Right before I wanted to give up on it, I found this delicious and easy treat by chance over Suncakemom. It looked so fabulous on its photos, that called for fast actions.

It was not difficult to imagine how it is created, its taste and just how much my hubby will probably want it. Mind you, it is rather simple to impress the man in terms of puddings. Anyways, I got into the website and simply used the precise instuctions that were combined with wonderful photographs of the method. It just makes life much easier. I could imagine that it is a slight effort to take pics in the midst of baking in the kitchen as you may normally have gross hands so I really appreciate the effort and time she placed in to build this blogpost and recipe conveniently followed.

Having said that I am inspired presenting my personal recipes in the same way. Many thanks the thought.

I was fine tuning the original mixture to make it for the taste of my family. I must say that it was an awesome success. They prized the flavour, the thickness and loved having a sweet such as this in the midst of a hectic workweek. They quite simply wanted more, a lot more. Thus the next time I am not going to commit the same mistake. I’m gonna twin the amount . 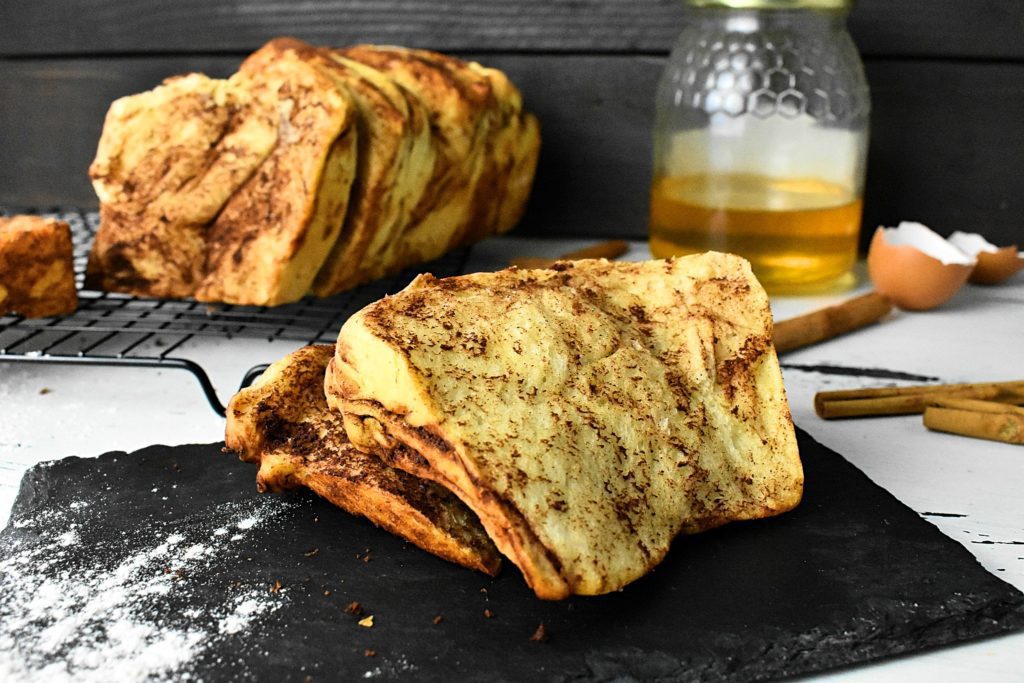 Put the fresh yeast into a half cup of lukewarm milk. Set it aside for five minutes. If it gets foamy don’t worry. It’s normal.

Get a big bowl and put flour, sliced butter, eggs and the rest of the milk in it.

Pour the yeasty milk into a big bowl on top of the other ingredients.

Knead the mixture well until it’s even and there’s no flour left on the edge of the bowl.

Cover the bowl and leave it in a warm place for about half an hour to rise. (We can put it in the 100°F / 40°C heated oven. Be careful not to turn the heat higher than that because it will kill the yeast and the dough is never going to rise.)

In the meantime, prepare the filling. Put butter, honey and ground cinnamon into a medium bowl, whisk them together and leave the cream on the side ready to spread.

After half an hour waiting take dough out of the bowl onto a lightly floured work surface and roll it into a 12 inch / 30cm square. Flouring underneath the dough is important as this coating will prevent it to stick down.

Spread the coat of butter, cinnamon and honey combo evenly on the top of the dough.

Cut the square into 4 equal strips and put them on top of each other. This may be trickier as it sounds if the dough sticks to the counter. Use a plastic scraper to help getting the dough off the worktop if it’s necessary. The dough is quite soft so try not to pull it much more than necessary.

When they are evenly on top of each other cut them into as wide rectangles as the baking tray.

Fill up the baking tray rather loosely. If it’s packed too tight the dough will bake together and we won’t be able to tear it.

Leave them under a clean kitchen cloth for another 20 minutes to rise then pop them into the preheated 365°F / 180°C oven for half an hour.

In some cases they can be baked earlier, in other ovens it would take 40 minutes to be ready. So it is worth to check after 25 minutes. Get a fork or a toothpick and poke the bread if no dough is left on the toothpick you can turn off the oven and take the bread out. Leave them cool down a bit before serving.